For this look, I combined bright blue and gold eyeshadows to create a striking, elongated effect on the eyes.  Using contrasting shades of eyeshadow together can draw attention to the eyes and really make them stand out.

I used shades from the Urban Decay Vice 2 Palette for this look but you can easily swap in other brands with similar shades.

Here’s how to re-create this look:

Click here to read my  ‘Parts of the Eye’ article for help on where to place eyeshadow colours.

1. Apply Primer Potion all over the lid as a base. You can either use your fingers or a flat synthetic brush (e.g. MAC 242).

3. Take a flat shader brush (e.g. MAC 239) and load it with Strike Gold eyeshadow.  Spritz the brush with All-Nighter Setting Spray and pat Strike Gold on to the lid.  Try to not sweep Strike Gold too high on the eyelid as we are trying to create an elongated effect on the eyes.  Applying the eyeshadow with a spritz of setting spray (or water, if you prefer this option) makes the eyeshadow look more intense and shimmery on the eye.  Be careful not to get water on to the eyeshadow itself, as this may cause the product to harden.

4. Sweep Rewind into the crease using a windshield wiper motion (e.g. MAC 217).  The idea here is to very slightly soften the edges from the eyeshadows in stages 2 and 3.  I used a neutral eyeshadow for this step as I wanted to soften the blue eyeshadow vcry slightly, whilst still keeping the overall effect crisp and defined.

6. Take a pencil brush (e.g. MAC 219) and apply Madness along the outer lower lashline.  Take the same brush and apply Strike Gold to the inner and middle lower lashline.  Applying the eyeshadows in this manner mirrors the placement of shades on the upper lid and helps to finish off the eye.

7. Take Zero eyeliner and apply a thin line along the upper lashline.  I used eyeliner in this look to add a little extra definition to the eyes.

8. Apply black mascara to the top and bottom lashes.

Here’s one more picture of the finished look: 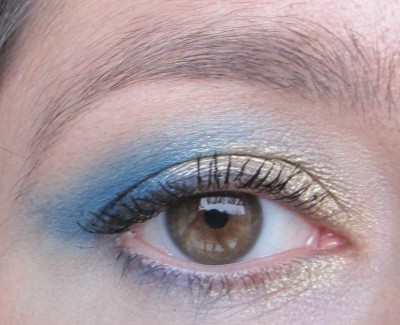 This site uses Akismet to reduce spam. Learn how your comment data is processed.

Today I focused on some of the pink, berry and red tones in the @bperfectcosmetics Antidote Palette. I tend to wear peach or plum lipsticks with pink eyeshadow looks but today I chose a pink lip.
Today I asked my daughter whether I should wear the Too Faced Sweet Peach Palette or the @bperfectcosmetics Antidote Palette and she chose the Antidote one. I've been keen to play with some of the green shimmers in the palette and selected Silvery and Granite for this grungy halo look.
Yesterday, I combined the @colourpopcosmetics Main Squeeze and Ooh La La Palettes to create this pink and red look. I wouldn't have normally thought to combine these shades but I saw the new BH Cosmetics Ghost Pepper Palette and liked the mix of pinks and reds. I was tempted to get that palette but I thought I could probably dupe it using my existing Colourpop palettes.
Yesterday, I put together a palette of 16 of my favourite @maccosmetics shimmer eyeshadows to use over the next few weeks. Sometimes I like to create my own quads from my MAC eyeshadow collection but I thought it would be fun to have a selection of purely shimmer shades to dip in and out off.
It has been a while since I have posted a look so here's one featuring a new palette in my collection. I recently got the @bperfectcosmetics Antidote Palette and love the wide range of neutral, grungy, bright and deep shades. I asked my daughter to choose my shimmer shade for my lids and she picked out Nectar, a gorgeous foiled medium warm gold.
Today's look is a quick one using shades from the @colourpopcosmetics Ooh La La Palette.
Today I had a play again with my @makeupgeekcosmetics eyeshadows. I really love the intense shine of Illuminaughty (the shade on my lid) and combined it with other greens and blues from my Matrix Palettes.
The other day, I saw @marlenastell post a video showcasing 8 new foiled Makeup Geek eyeshadows that are being released and it made me really want to use my Makeup Geek palettes. The Makeup Geek eyeshadows are staples in my collection as I love the quality, pigment, ease of blending and the range of shades. Do you have any Makeup Geek products in your collection?
It's been a while since I have posted a look so here is one using my @anastasiabeverlyhills Norvina Pro Pigment Palette Vol 5. The look is more vibrant and shimmery in person but the lighting was a little tricky today.
This morning, I was watching a video by @andreamatillano where she suggested the Colorpop Blowin' Smoke Palette as a possible alternative to the Natasha Denona Mini Xenon Palette. I actually had the Colorpop palette in my 'shop my stash' basket so seeing Andrea's video inspired me to pull it out.
This week I am using my @toofacedlovestheuk Pumpkin Spice Palette for my eyeshadow looks. Today's look features a mix of the yellow, orange, brown and gold shades from the palette. I've been creating more everyday, easy looks so far with this palette so I might do something smokier tomorrow.
Today started out as quite a cool, autumnal day and I found myself gravitating towards my @toofacedlovestheuk Pumpkin Spice Palette. There is something very warm and cosy about this palette, both in terms of the shades and the scent. I love the scent as it is so toasty and spicy and the shades are perfect for Autumn.