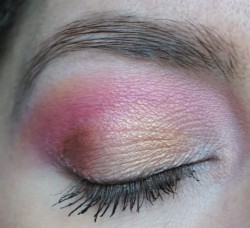 Today’s look for the Rainbow Series is based around ORANGE, the second colour in the rainbow.  I combined orange with pink, copper and white for a bright sunburst effect on the eyes.  You can view full face shots, along with the cheek and lip colours I used, in this post.

The Rainbow Series includes looks based around each of the colours of the rainbow.  You can read about the series and view more posts here.

Click here to read my article ‘Parts of the Eye’ for help on where to place eyeshadow colours.

1. Apply Smashbox Photo Finish Lid Primer all over the lid as a base. You can either use your fingers or a flat synthetic brush (e.g. MAC 242).

2. Take a crease/blender brush (e.g. MAC 2226, 217) and sweep Gossip into the crease of the eye.  Use the same brush to apply Gossip on to the outer part of the lid to add some shape to the eye.

4. Take a flat shader brush (e.g. MAC 228, MAC 239) and Warning on the outer part of the lid in a slight ‘v’ shape.  This step helps Jones and Gossip to blend together more easily, whilst adding a fun coppery slant to the look.

5. Take the same flat shader brush (e.g. MAC 228, MAC 239) and pat Bump in the inner corners.  This step adds extra brightness to the eyes and some contrast to the other shades elsewhere on the lid.

7. Take an angled eyeliner brush (e.g. MAC 266) and apply Platonic along the upper lashline.  This step adds some soft definition to the eyes.

9. Apply plenty of black mascara to the top and bottom lashes.

Here’s another close-up of the eyes: 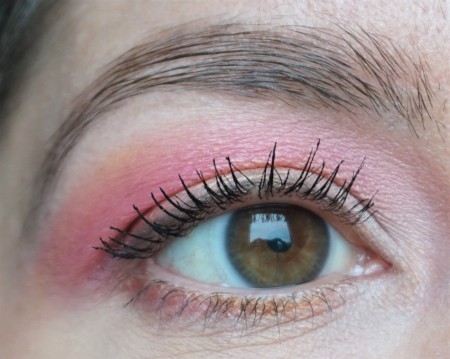 Here are some full face photos to show how the whole look comes together:

To complement the look: I used Makeup Revolution The Emily Edit ‘The Needs Palette’ as a bronzer, blusher and cheekbone highlighter (you can read more about the palette here).  I also used MAC Creme Sheen Lipstick in Shanghai Spice to add some subtle colour to the lips.

Next up: Yellow Rainbow! Keep a look out for the next installment in my new Rainbow Series!

This site uses Akismet to reduce spam. Learn how your comment data is processed.